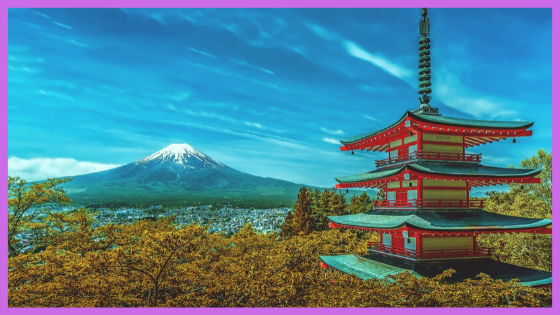 #21. Baseball is the most popular sport in Japan and it was introduced back in 1873 by an American teacher, Horace Wilson.

#22. Tsunokakushi (horn cover) is a kind of headcover which is worn in a traditional Shinto wedding by the bride to cover the “horns of jealousy” she is thought to have for her husband.

#23. Samurai are the ancient warriors of Japan. These warriors were very skilled swordsmen and they wielded a sharp sword called Katana.

#24. Japan suffers from acid rain, due to gases produced by power plants.

#25. While baseball is most popular in Japan, Sumo is the national sport of Japan.

#26. There is a festival called Hadaka Matsuri or Naked Festival, in this festival, thousands of men remove their clothing because of a belief that a naked man has a greater ability to absorb evil spirits and the most intimate part of the body is covered with a cloth called Fundoshi.

#27. The Japanese word Banzai which means “10,000 years” and it was used to wish the emperor a long life. Now Banzai is merely used as a cheer like “Hip Hip Hooray!”.

#28. The Tale of Genji which is also thought to be the world’s first novel was written by Japanese noblewoman Murasaki Shikibu in the early 11th century.

#29. In Japan, the number 4 (shi) is considered unlucky because it sounds the same as the word for death and because of this many tall buildings don’t have the 4th floor.

#30. While many countries regard the heart as a symbol of emotion, Japan considers Hara (belly) as the center of thoughts and emotion. The Japanese value silent communication, which they called Haragei (Speaking from the belly).

#31. At midnight of Shōgatsu or New Year’s Eve, the Buddhist temples of japan ring the bell in their temple 108 times to drive away 109 evil desires that humans fall prey to. The event is known as Joya no Kane and is broadcasts on Japanese radio.

#32. Geisha means “person of the arts” in Japanese and because nowadays many geishas are women people would think this is mainly for women but the first geishas were men called taikomochi and they had a role similar to western court jesters.

#35. More than 1 million people from all over the world climb Mount Fuji every year during the official climbing season of July and August.