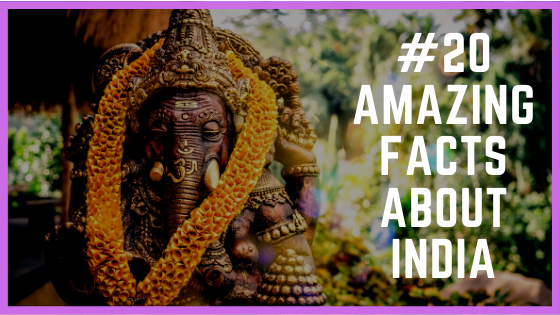 Fact 11. Every state has it’s own unique symbol:

From Arunachal Pradesh to West Bengal, every state and union territories have a unique symbol which includes 4 categories animal, flower, bird, and tree. some of the states do not even have all 4.

Fact 12. Wettest place in the earth:

Mawsynram is a place located in the east of Meghalaya which receives 11,872 mm of rainfall every year. -Source

It is also holding the Guinness world record for the wettest place on earth.

Many Indians have been nominated for the Nobel prize but only a few were able to bag the award.

All the Nobel prize winners from India:

Rabindranath Tagore won the Nobel prize in literature in 1913.

Har Gobind Khorana won the Nobel prize in medicine or physiology in 1968.

Subrahmanyan Chandrasekhar won the Nobel prize in physics in 1983.

Fact 14. India is the reason for number 0 to the world:

We owe the number 0 to Indian mathematician and astronomer known as Aryabhata, which is one of the most important discoveries in the history of mathematics and mankind. -Source

In over a century of Olympics India only has 28 gold medals from 24 Olympics games India has participated in from 1900. -Source

On 5 August 2019 government dissolved Article 370 and 35a which led to the creation of two Union Territories Jammu & Kashmir and Ladakh. Now instead of 7 Union Territories, there are 9 of them. -Source

Cricket is the most popular sport in India but not a national sport and still has 93% of the sports viewership toward cricket.

India is the largest viewer of cricket. -Source

Fact 19. Indian civilization is the oldest in the world:

You might think that this is not true because so many people often think that ancient Greek and ancient Egypt were the oldest civilization because they are widely known but Indus valley civilization dates back to 2400 BC.

It is the second oldest civilization.

There are even authenticated human remains that were found in South Asia which dates back to 30,000 years. -Source

Statue of late politician Sardar Vallabh Bhai Patel also known as the statue of unity is the world’s tallest statue.

India is a place that consists of a vast amount of culture and heritage.

It cannot get inserted in 1 article even if I wanted to.

This article doesn’t do any justice to the heritage of India but still, I tried my best to give you everything I can through this 1 article.

Be sure to stay updated for the next article about India