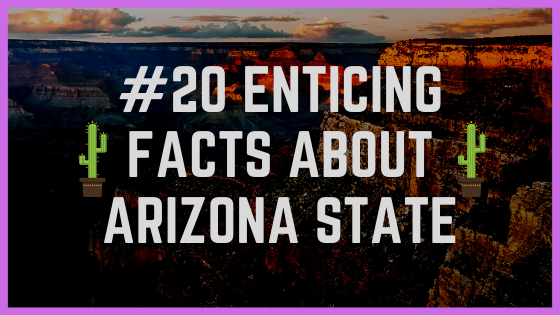 If you’re one of the people who live outside the United States or you live in the country but never been to Arizona, you might be thinking what more to know about this place other than Grand Canyon or long miles of dust. So let me tell you that these fun facts will change your mind for good.

Arizona is located at the southern part of the North America

These are some amazing Fun Facts about Arizona state :

#1. The territory of Arizona was the part of Mexico till 1848 but it became the part of the U.S. after winning the Mexican-American War in 1848. In 1912, Arizona became the 48th state in the Union.

#2. If you cut down a Saguaro cactus (Carnegiea gigantea) in Arizona, you could face up to a year in prison because it is an endangered species and once cut it can take up to 100 years to grow due to low precipitation.

Checkout some facts about Saguaro cactus

#3. My favorite band Linkin Park is from Arizona and not just them but this state is responsible for Alice Cooper, Tool, A Perfect Circle, Social Distortion, Linda Ronstadt and Stevie Nicks.

#4. The Federal Aviation Administration or FAA is created after two planes detoured over the Grand Canyon’s airspace for a better view and ended up colliding directly over the canyon in 1956.

#5. This is the best-preserved meteor crater in the world called Barringer Meteorite Crater and it is located in Winslow, Arizona.

#6. Every year more than 150 people are bitten by rattlesnakes because the most common rattlesnake in the Grand Canyon has an unusual pink hue, that blends in with the rocks, it is known as Grand Canyon Pink Rattlesnake (Crotalus oreganus abyssus).

#8. The Apache trout (Oncorhynchus apache) is only found in Arizona and is an important part of Arizona’s natural heritage. It was down-listed in 1975 from endangered to threatened.

#9. Since Herbert Hoover, every American President has stayed in Arizona Biltmore Resort and Spa in Phoenix, except Barack Obama.

#10. In both the years 1933 and 1937, Phoenix experience the biggest snowfall in the history of Phoenix, Arizona. According to the National Weather Service, snowfall measured one inch.